New flash -- it is still cold.

and this is how we feel about it

And we are officially running out of mittens. Also - there is a rip in the side of Gav's boot that lets the snow in. And M's snow pant straps are broken.

On the bright side - days are getting longer. I see the sun before I leave for work in the morning. And that is glorious. And when the sun is shining you can almost forget that it is still -2.0C. And, also, I ran outside last week.

My little orchid doesn't seem to care that there is snow on the outside of the window sill. I don't know much about orchids but I thought they were finicky and delicate. This one is defiant.

I'm feeling defiant myself lately. I did not go Paleo like everyone else I know. I'm proud of this actually. Not too long ago I would not have hesitated to jump on the latest and greatest diet philosophy. I would have been there, right along with the rest of Pinterest looking for coconut flour recipes and making rice out of cauliflower. Instead, I'm still eating avocado toast for breakfast and last night I made pasta for dinner. Gasp! I know. I'm such a rebel.

Regardless, as I was throwing together this - and this feels like a rather 1990s dish to me - it occurred to me that it is almost Paleo. But then I had to stop and wonder if parmesan and walnuts are Paleo. Which lead me to understand things are not very cut and dry in Paleo land. It is all rather complicated. In any event, this Cauliflower Gratin is really comforting and rich and low carb. Perhaps Paleo, but not vegan unless you skip the parm - which would work just fine, although adding an equal amount of bread crumbs tossed in some olive oil would add a nice little crunch to the top to make up for the lack of parm, but then, of course, Paleo flies out the window...

Don't skip the cinnamon. It does something crazy good to the tomatoes and onions.

This dish was inspired by "Vegetarian Cooking for Everyone" by Deborah Madison. Which very well may be my very best and favorite cookbook of all time. 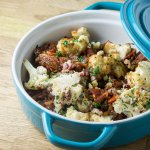