You are here: Home » Recipes

Cranberry Apple and Oatmeal pancakes are perfect when you need a special breakfast but still just want pancakes. I like to top these pancakes with bright red pomegranate seeds for a festive look, but that is completely not necessary. This recipe is dairy-free.

I remember an episode of Nigella Lawson’s Food Network show where she opened up a pomegranate and hit the back of it with a spoon to knock the little gems out.  Effortless. Little globes of juice intact.

Maybe my technique was all wrong, maybe my fruit was not perfectly ripe. Maybe my shoes were tied too tight. Okay – I wasn’t wearing any shoes, I was still in my PJs.  Now juice-stained PJs.  Popping the seeds out of a pomegranate is messy. And the spoon thing just did not work for me.

When I was a kid, during the holidays and when pomegranates were available relatively cheaply, my mom would plop my brother and I down in front of a Christmas TV special with a bowl and half a pomegranate each and just let us munch away. I’m confused because I don’t recall having to sit on a towel or something to protect the carpet.  As a mom myself, I don’t know how my mother considered this a good idea – health benefits aside - there must have been a permanent pink stain on the living room carpet 2 feet in front of the TV.  I don’t know how she put up with that.  I have hardwood and there is no way my kids are eating pomegranate seeds in my living room.  No way.

I adapted this Cooking Light recipe, which is also in this book.  The original recipe called for quick oats which I never have.  I always buy large flake oats – I like the hearty texture.  However, this recipe call for very little flour so I thought a finer oat would be beneficial.  My kids are huge oatmeal fans so I do buy instant oatmeal for quick weekday breakfasts.  I used one package of plain instant and two of packages of PC Blue Menu Apple Cranberry instant oatmeal -- thus Cranberry Apple Oatmeal Pancakes.

For the balance of the oats, I used my favourite large flaked oatmeal.   I used soy milk, curdled with a bit of apple cider vinegar instead of buttermilk, earth balance instead of butter and omitted the sugar since the instant mix already had enough sweetness.

Once I had mixed everything all up, I was concerned that the batter was a bit too watery so I added a couple extra tablespoons of flour.  I also let it sit for about 15 minutes hoping the oatmeal would soften and thicken the batter up.  Still I was worried these would be flat and rubbery. Surprise! The results were awesome – chewy and slightly sweet.

Ever notice that pancake recipes just never seem to make enough – technically this is a double batch, which generously served the four of us with a couple extra pancakes to warm up another day.

On a medium hot skillet, sprayed with cooking spray or otherwise lightly greased, drop batter using a ¼ cup measure. I use the back of the measuring cup to push the batter into circles. Cook until tops are bubbled and edges are cooked – 2 minutes, flip and cook for another 1 or 2 on the other side. You know they are ready to flip when you can flip them and they stay relatively solid, holding their shape. If the pancakes start dripping all over as you flip they need to cook longer on the first side.

I served with pomegranate seeds because I had spent a considerable amount of time prying the little seeds out. I had to use them. The pomegranates nicely accented the cranberry apple flavour in the instant oats and added a nice fresh pop to each bite. 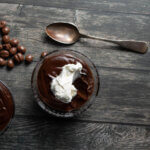 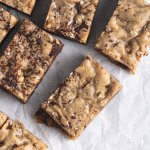 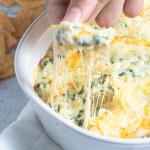 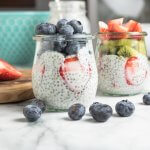